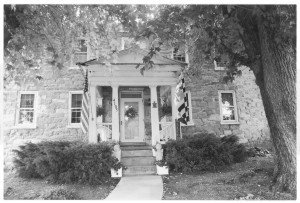 Just south of Sharman’s Run on Mills Road, two great maple trees stand sentinel before a farmhouse, shading it from passersby. The house is built of roughly coursed fieldstone with quoined corners. Five bays are evenly spaced across the façade. A later, one-story entry porch protects the central door. Windows have nine-over-six sashes and simple frames. In the center bay, the six-panel entry door opens beneath a four-light transom; and the entry jambs have a single, hand-planed, raised panel on either side of the door. To the rear a long wing has double porches, now enclosed, on its north side. 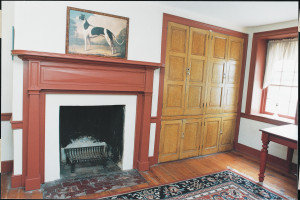 Terry and Vicki Karn purchased this house and a little less than twelve acres of land in 1981. The house had been on the market for over a year and had been empty for quite some time. Paint peeled from the walls in sheets, mold grew in the corners and pigeon droppings carpeted the attic floor. There was no water, and a well had to be drilled before they were allowed to move in. In spite of all this, Terry was excited about the house because so much original fabric still remained.

With the move finally underway, a blizzard started; and possessions were stacked in the garage and house as the Karns rushed to avoid the weather. Terry, Vicki, and their daughters Traci and Tiffany camped out in their new home as they set about making it their own. First they cleaned and removed debris, then they started restoration. Raised German pointing was replaced on two façades, and the rest of the job will be completed this fall. Failed plaster was removed and replaced; windows and frames were repaired and sometimes replaced. The kitchen and the enclosed porches remain to be done. As in many old house projects, the spaces that function adequately are left unchanged until just the right plan is conceived. 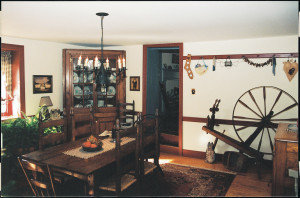 The Karns saved all the original fabric of the house that they could and duplicated features that couldn’t be saved. Five of the seven six-panel interior doors still have their original two-color paint scheme. Vicki chose her colors carefully to match and to blend with these original paints.

Once part of the vast Antietam Iron Works holdings, a farm containing this parcel was transferred from the owners of the Iron Works to David Showman (also spelled Sharman and Sherman) in 1842 and remained in that family until 1933.

The house was built in three sections. The lower floor of the wing was built first, while the property was owned by the iron works. Shortly after the Showman purchase, the front block was constructed. About ten years later, the second story of the wing was added. The building has evolved around the changing needs of its owners. 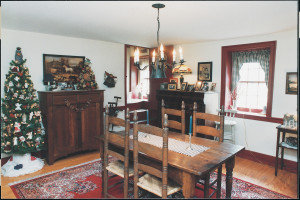 The entrance door of the main block of the house opens into a broad hall with a single room on either side. Originally the door at the far end of the hall opened onto the lower level of the galleried porch. An earlier owner enclosed the porches and added a small bath at the end of the entrance hall. Floors are random width pine throughout the house; chair rail, most doors and woodwork are original. Enclosed stairs at the rear of the hall lead to the upper floor.

On the left (east) side of the entrance hall is the library, now Terry’s office and the nerve center for the Karn’s real estate business. Two windows look out toward the road, and another views the back yard. On the gable end wall is a fireplace with a parged firebox and a simple but elegant mantelpiece. Beside the fireplace, in the shallow alcove created by the chimney, stands a large cupboard with eight-paneled doors and simple moldings. It still has its beautiful original grain painting as does the door to the hall. 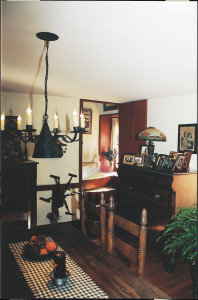 The living room is on the right side of the hall. Its ample fireplace has been closed to accommodate chimneys for the furnace and a soapstone woodstove that warms the room. The wide mantelpiece still defines the fireplace area, and another eight-door cupboard similar to the one in the library fills the space to the left. This one had been painted over the graining. At the back of the room, a door opens onto two steps that lead down into the dining room in the original, two-room section of the building.

The dining room has six-over-six windows on both the east and west walls. The rear of the dining room is the dividing wall of this wing of the house. Here, on the right, steep winder stairs are illuminated by a window. These stairs are tucked next to the chimney column that serves the kitchen fireplace. On the other side of this chimney wall is the opening that leads to the kitchen and a tree decorated with angels of every variety. Angel statues, angel paintings and folk art angels are displayed in nearly every room. “Angels taking care of our house,” says Vicki Karn as she gestures toward the tree. The large kitchen beyond the dining room remains as it was when the Karns bought the house. The original service fireplace had been reduced in size and brick faced, but there is a charming under-the-steps cupboard beside it, its narrow batten door’s upper left corner cropped to fit the slope of the dining room stairs. 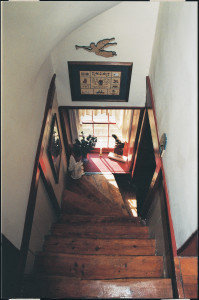 Upstairs, the main block of the house is laid out like the first floor. The eastern bedroom has a fireplace with a simple mantel and a closet with two large doors to the right of it. The other bedroom has no fireplace but does have an original eight-door cupboard, and the Karns have added a duplicate on the other side of the chimney. Winder stairs lead to the attic; a wall of hand-planed boards separate it from the rest of the hall.

At the rear of the hall is a door into the upper level of the wing, also two steps below the front block of the house. There are three rooms in the space above the kitchen and dining room, with the enclosed upper porch extending along the side of these rooms. Exterior stairs at the end of the double porch give outside access to this space. A small fireplace has a narrow, closed cupboard tucked into the space beside the chimney in the first room. Its mantel board reaches just to the edge of the molding around the cupboard and stops, a charming piece of folk carpentry.

This small apartment belongs to the Karns’ daughter Tiffany now in her second year of law school; and it will soon be home to her new husband as well. Terry and Vicki are busy preparing for their August wedding, adding a new patio beside the double porches and plantings around the ancient maple, almost sixteen feet in circumference, that dominates the garden. Greystone Farm is again changing to meet the new needs of its family.

Epilogue: Tiffany has married, graduated from law school, passed the bar and has a house of her own. The rooms that she and her husband used for an apartment are now used for storage. Historian Dennis Frye has identified a photograph of President Lincoln with General McClellan as having been taken in the field behind the Karn’s home where a signal tower was in place during the Battle of Antietam. McClellan had his headquarters in that area, and Lincoln may have stayed at the house when he visited.

This article appeared in the Herald-Mail Sunday, August 2, 1998 as the 106th in the series.